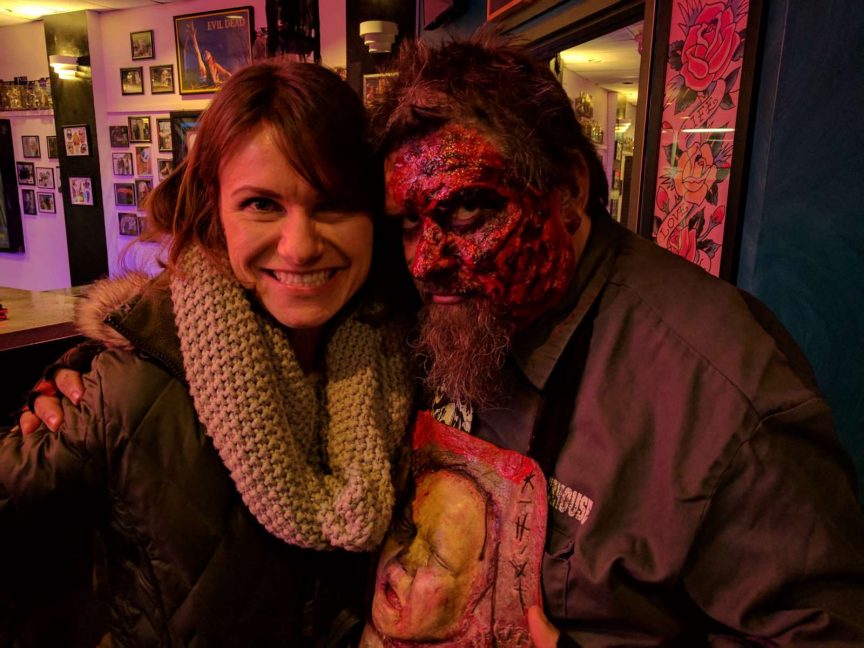 One of our favorite things about traveling to tradeshows and conventions is getting to explore haunts around the country. The HauntPay team recently attended HAuNTCoN in Nashville, TN, and we couldn’t pass up the opportunity to check out some of the city’s best scares.

Nashville is a city known for wholesome pursuits like barbecue, hot chicken, and country music. But lurking in the shadows of its honkey tonks and family diners is a treasure trove of dark nightmares and twisted terror. We hit up three of its best haunts – Haunted Hell, Nashville Nightmare, and Slaughterhouse – to see for ourselves just how hideous and horrific this town can get.

Be advised, there are a few spoilers about the types of experiences you’ll find inside these haunts. But we tried our best not to give away the scares.

HAUNTED HELL
We started our tour of the Music City with an evening at Haunted Hell, located in Antioch – just 15 minutes from downtown Nashville.

As you prepare to enter this haunt, the dense drum and bass tones of their thrash metal soundtrack set the mood for the terror and mental disorientation you’ll experience inside. Hell makes excellent use of sound as a means to stupefy and startle visitors – with gleefully scary results – as they terrorize you throughout 22,000 square feet of rotting ruins and grueling landscapes.

Many of the scenes look almost normal at first glance – a sleepy plantation home, a babbling creek – but nothing here is as it seems. As your descent into Hell begins, your worst fears, your darkest and most twisted nightmares are waiting for you.

Our hands-down favorite part of Haunt Hell is the Disorientation Room, a winding black and white checkerboard hallway where the floors and the walls tilt and pitch like something out of a demented Lewis Carroll fantasy. Add in a double flash strobe light, and the effect is so disorienting you’ll spend the next two rooms trying to get your sea legs. This is awesome because it leaves you vulnerable to scares, and Hell’s actors know it. They’re ready for you.

The haunt contrasts overstimulation with sensory deprivation. You’ll go from strobe lights and colors to a Black Out Room where you have no idea how far you need to walk (or really, in which direction) to reach the next doorway.

Even without anyone jumping out at you, it gets your heart racing. But Haunted Hell stacks their rooms with gruesome demons and deranged psychopaths who create shock and mayhem around every corner. Often it’s not just one but two or three scare actors swarming your personal space. It puts every hair on your skin at the ready. You’ll walk through the next room on edge, expecting to be scared…until you’re not – and that is when they attack. 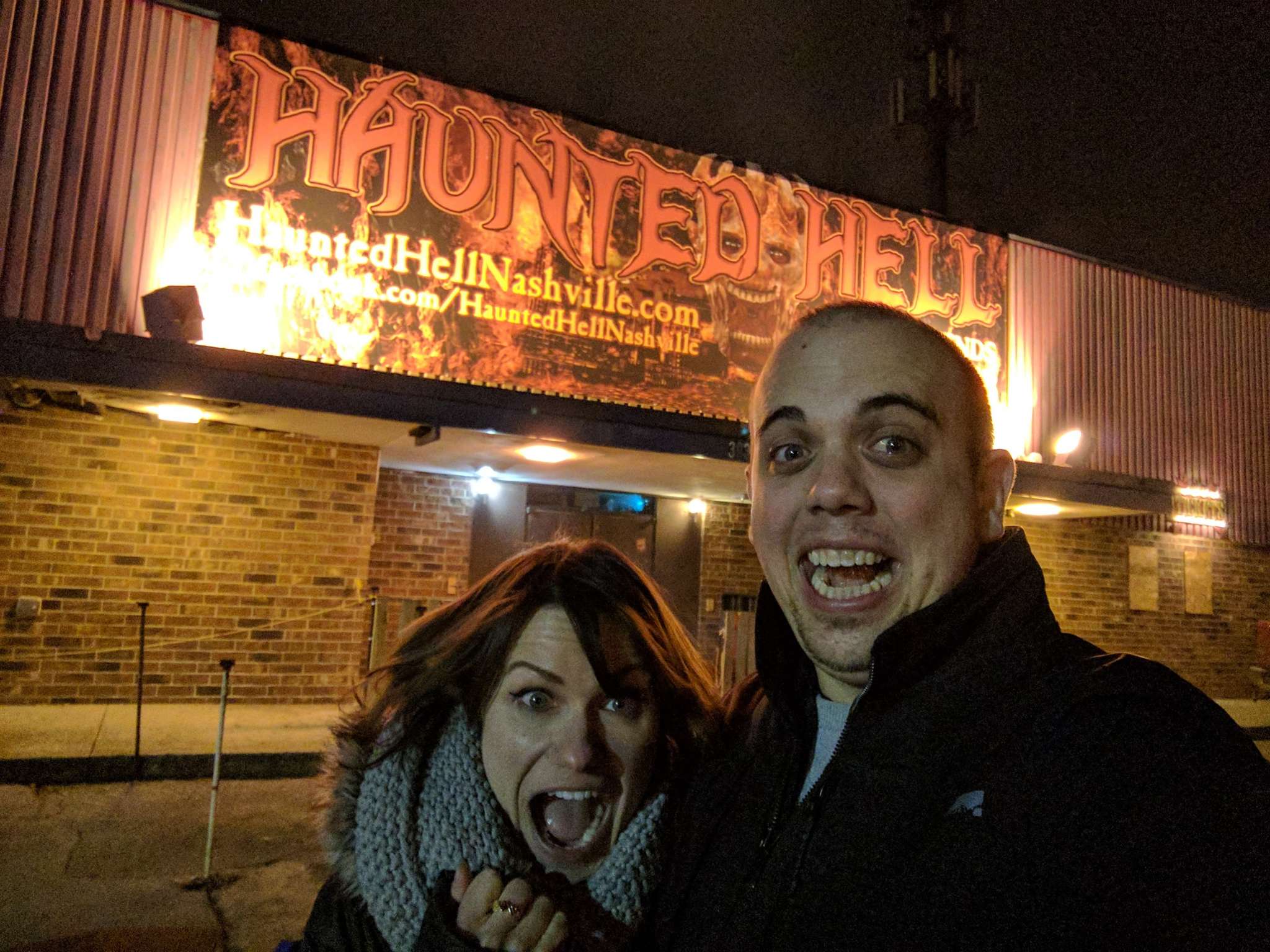 Even before you get in line you’ll be greeted by fire-swallowing circus performers, maniacal clowns, a grim grinning tooth fairy and an entire cast of sinister creatures. There were easily 20 scare actors working the queue. That is a lot of actors. They travel up and down the line – flanked by an abandoned schools bus and military bunker – throughout the evening, taunting and startling the crowd of captive victims. It makes the wait a lot more fun. These queue interactions also give you an opportunity to appreciate the detailed characters and costumes the actors have crafted for themselves. Usually, we’re too busy shrieking and cowering to really look at that stuff up close.

As many scare actors as there are outside, you’ll encounter many more as you brave the first part of Nashville Nightmare. Wind through the halls of a once ordinary high school where something has gone terribly wrong. Disfigured monsters and ghastly spirits lurk in the library and locker room, just waiting to terrorize you.

Nashville Nightmare made really good use of smells to immerse you in their gruesome and gory scenes. It’s one thing to walk through a room speckled with realistic-looking, oozing entrails. But a bloody meat locker or abandoned laboratory splattered with guts that actually SMELLS like rotting flesh? It’s a little harder to pretend that the brains smashed all over that sink are just props. This was an unusual touch, one that a lot of haunts overlook, and we really enjoyed it.

Next, it’s on to the zombie zone, Industrial Undead, which momentarily takes you outside back to the queue area then through a makeshift bunker complete with guard tower and barbed wire fences.

And there’s still more haunts in the next building. Nashville Nightmare is four attractions in one place. Descend into the dragon’s chamber, traverse a shudder-inducing crypt and tromp through dank sewers where larger-than-life animatronics and an onslaught of live actors deliver a nightmarish spin on classic fairy tales and original horrors. 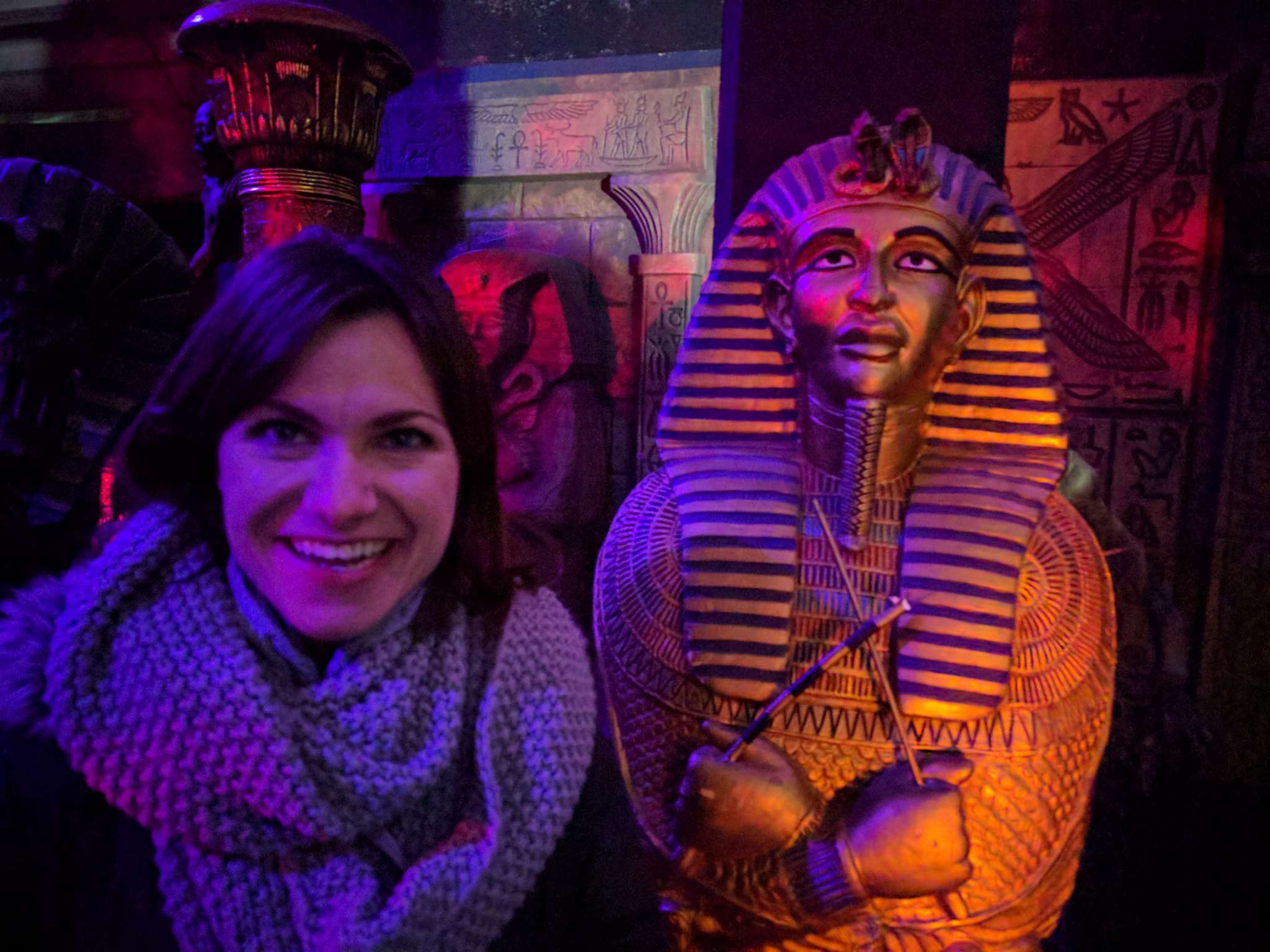 The only scare actor I wasn’t terrified of at Nashville Nightmare. Photo Credit: Alex Linebrink

SLAUGHTERHOUSE
Nashville’s longest running haunt, Slaughterhouse has been terrifying Tennesseans since 1986. Now under the management of Full Moon Inc., the haunt recently relocated inside an old movie theater cineplex in Hermitage, a 20-minute jaunt from downtown. The lobby smells of freshly popped popcorn (you can get real movie snacks!), and one of the screens still contains a working theater. Adjacent to the theater, the Full Moon team operates a full-service tattoo shop which you can access through the lobby.

We love haunts that are located in buildings which used to be something else. It adds so much character to the space. In the case of Slaughterhouse, its position in a former film house means that a lot of the floor space the haunters had to work with was slanted – like rows of seats in a theater. Rather than tearing up the floors and starting with a flat surface, they used the unique architecture to construct a winding path of ramps that tilt upwards and down as you journey through its unearthly series of grisly and grotesque frights. It actually seemed to give them extra space to work with, as this haunt feels a lot bigger than it looks.

Before entering the Slaughterhouse you’ll be greeted by one of the zombies, demons or other undead hosts like Uncle Creepy, a bloody blade-wielding butcher with an apron made of human faces. You’ll be summoned to a back room to meet the dark lord Sebastian, and your cursed expedition through the savage underworld begins. Cinephiles and fans of fear icons like Freddy and Jason will appreciate the nods to classic horror films woven throughout Slaughterhouse’s twisted story.

The showstopping climax is a maze within the haunt itself, and this was our absolute favorite part of the experience. Without giving too much away, it involves a room made entirely of mirrors, some of which open to dead-end hallways and spooky corridors to nowhere. Oh, and a pair of demonic clowns taunting and misdirecting you around every turn. Can you find your way out in time? 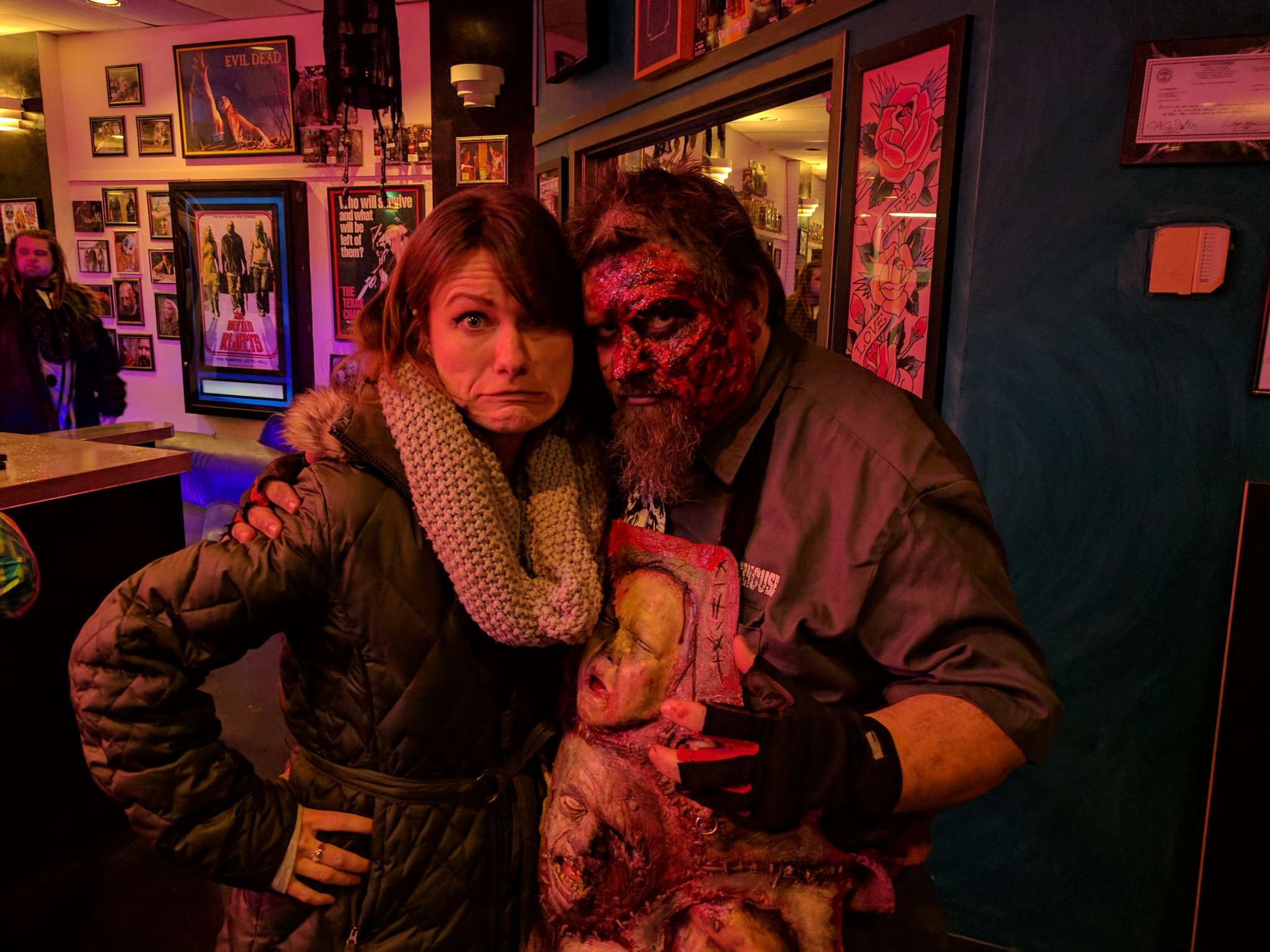 A little nervous my face would end up on Uncle Creepy’s apron, at Slaughterhouse. Photo Credit: Alex Linebrink

Have you been to any of Nashville’s haunted attractions? What did you think? Which are your favorites? Let us know in the comments!