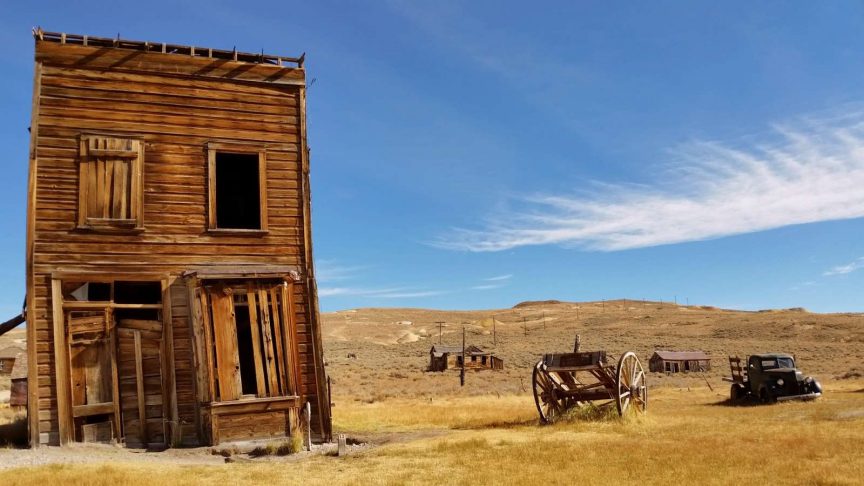 Today we’re traveling around the world in search of ghost towns: abandoned cities and vacant villages where folks moved in, build thriving communities then mysteriously vanished, leaving the town in a state of arrested decay.

But we’re not just interested in any old abandoned town. We’re interested in the real life ghost stories; the settlements still haunted by the tortured souls of long-deceased residents who met their grisly end in these curiously eerie landscapes.

We’ve rounded up the top ten haunted ghost towns around the world. Here are the first five. Which of these spooky spots would you like to visit?

10. Island of the Venetian Dead, Poveglia

Normally, a secluded island off the coast of Italy sounds like a fabulous vacation spot. Unless that island houses the mass graves of thousands of plague victims and has a reputation for haunting its inhabitants.

Poveglia’s history is so creepy that its real-life events inspired the film Shutter Island with Leo Dicaprio. Located near Venice, the small island served as a quarantine location during the 18th Century for ships entering the port of Venice. When bubonic plague cases were discovered on two ships, the entire island was sealed off and those with infectious diseases were left there to meet their untimely ends. More than 100,000 people are said to have died on the island, buried in mass graves known as “plague pits.”

From 1922 to 1968 the island was reincarnated as a mental hospital run by a doctor who performed medical experiments on his mentally ill patients. The good doctor himself was driven mad on the island – he leapt to his death from the hospital tower after claiming to be haunted by ghosts.

The island went up for auction in 2014 but the sale was never completed.

Built as a futuristic resort in 1978 in New Taipei City, San Zhi is dotted with round pod buildings that resemble UFOs. The alien-like structures were built primarily to house U.S. service members taking some R&R after their postings in East Asia.

The town may have been cursed before it was even built. A Chinese dragon sculpture, located near the resort’s front gate, was destroyed in order to widen the road leading into San Zhi. Since dragons are a revered symbol of luck and good fortune, some believe the removal of this statue sealed the resort’s fate. A rash of car crashes and mysterious suicides halted the construction in 1980, leading to more whispers of superstition and hauntings.

Locals wouldn’t dare enter the resort, although a few brave travelers snuck in over the years to capture photos of the eerie, crumbling structures or tag the pods with graffiti.

Sadly, the buildings were torn down in 2010 to make way for a new seaside resort. The jury’s still out on whether the ghosts left with the pods.

Located 877 miles off the Australian coast, this remote island was settled by Polynesian voyagers during the 13th or 14th Century. Captain James Cook was among the first Europeans to arrive in 1774.

The island enjoyed a relatively quiet existence until 1824 when the British government designated Norfolk as an island prison for its most violent criminals. Think of it as the Sing Sing or San Quentin of the British penal colonies. The guards also had a reputation for brutality; torture and hangings were not uncommon. Public outcry over the harsh conditions forced the abandonment of Norfolk Island in 1855.

Today the island is known as the most haunted place in the Pacific. One of its spookiest locations is said to be the Heritage Hill, a boarding house and restaurant turned resort. Only the bravest of guests dare stay in Room 5 which is plagued by the ghost of Maria Heaps, the building’s original owner. Unexplained loud bangs and mischievous spirit pranks are regularly reported, along with “ghostly shuffling” and the feeling that you are not alone. Almost all of the ghostly incidents occur in or near Room 5.

Picture an idyllic mountainside village, dotted with stone houses, where people of different cultures and religions live in harmony together. This was the picture of Kayakov, Turkey from the 1700s until the early 20th century. It was a bustling town of craftsmen; Greek Orthodox Christians and Muslim Turks lived in relative peace.

Then, almost overnight, they were gone.

In the early 1900s, Kayakoy found itself in the crossfire of several major conflicts including World War I, the collapse of the Ottoman Empire and the Greco-Turkish War. In 1923 the Greek and Turkish governments reached a peace agreement which involved compulsory resettlement of the Kayakoy residents. What followed were a series of brutal death marches which left the roads outside the village strewn with dead bodies as women, children and the elderly perished from hunger and fatigue on the 15-day journey.

Today, Kayakoy is known as the “ghost village.” Harsh weather and a 1957 earthquake reduced much of the town to rubble, the houses’ stone roofs torn off or worn down over time. But the skeletons and ghosts of happier times remain.

Disembodied voices, approaching footsteps, skeletons rising from their graves. We wouldn’t be caught dead in the La Noria cemetery after dark.

Just walking through down in broad daylight is creepy enough: human bones have been found scattered in the streets, and the cemetery is dotted with empty graves and open coffins.

Located in the deserts of Northern Chile, La Noria was established as a mining town during the 17th Century. The settlement was abandoned after the global economic crisis of 1929, the town looted and plundered. Those who came looking for treasure did not stop at the cemetery gates; robbers dug up the graves of La Noria residents and pilfered anything of value they could find, leaving their coffins opens and skeletons exposed. It’s those grave robbers who may be to blame for the town’s haunted history. Legend says that when the sun goes down in La Noria, the dead rise from their graves and take over the village.

La Noria was also the site of a chillingly small human mummy, discovered in 2003 by looters. This led to rumors of extraterrestrial activity in addition to the ghost sightings.

Are you brave enough to visit any of these haunted ghost towns? Which one would you like to explore?

Check back next week for Part 2 of our Top Ten Haunted Ghost Towns!