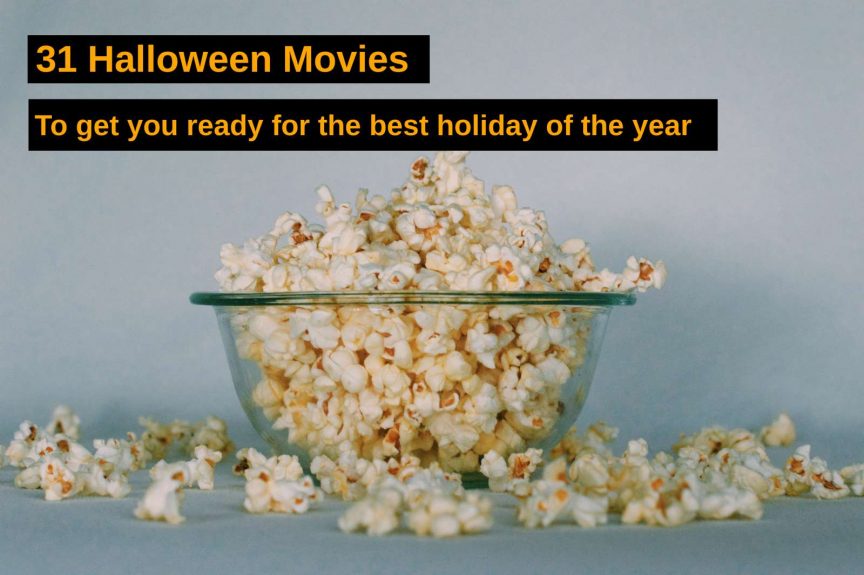 October is finally here! Forget pumpkin spice lattes, our favorite rite of fall is curling up with some popcorn and a scary movie. In fact, we like to watch one every day leading up to October 31. There’s something about the crisp air and the colorful leaves that just makes us crave a good scare.

Here are 31 monster movies, slasher films and darkly hilarious Halloween flicks to get you ready for the best holiday of the year.

We like to start the season off with Mel Brooks’ laugh-out-loud take on the classic monster movie. It reminds us that Halloween doesn’t always have to be scary, it can be funny, too.

One…two…Freddy’s coming for you! Next up, we’re watching the slasher film that had us afraid to fall asleep and checking our pajamas for knife marks for weeks when we were kids. There are actually nine films total in this slasher franchise, so we might just spend the day binge-watching the whole series.

After being terrorized by Freddy’s slashing knife-fingers, we like to turn to the well-meaning, if oddball, adventures of Edward and the Boggs family. Our heart breaks everytime Edward gets shunned by the neighborhood, but our hope in humanity is restored when he finally gets that kiss.

Head spinning, scarification of flesh, speaking in tongues. The Exorcist is a classic horror movie that stands the test of time. It’s easy to see why this was the first horror film to be nominated for Best Picture at the Academy Awards. It’s one of the greatest of all time.

5. An American Werewolf in London

Another monster movie that doesn’t take itself too seriously, American Werewolf is packed with mystery, mistaken identity and mythical creatures. Watch this one on October 5, when the full moon rises.

The original vampire story, Nosferatu is an essential element of any respectable Halloween movie marathon. The name of the lead actor, Max Schreck, literally means “fear” in German, and this controversial 1922 picture paved the way for all future thrillers that followed.

Norman Bates is the original serial killer in one of Hitchcock’s most famous works. Even though he’s pure evil, we’re somehow kinda rooting for him, too.

We love Tim Burton’s paranormal gothic interpretation of the headless horseman legend. It’s beautiful, quirky, dark and terrifying all at the same time.

They’re heeeeeerrrreeeee. Let malevolent ghosts take over your TV for the night. Watch out for bending silverware.

This horror-comedy cult favorite taught us to not always take scary movies so seriously; we can be terrified and tickled at the same time. Pop an extra bowl of popcorn and continue the trilogy with Evil Dead 2 and Army of Darkness.

Join the cackling Sanderson sisters on a series of bumbling antics through modern-day Salem as they try to suck the souls of every last child while trading witty banter and overly dramatic facial expressions. It will put a spell on you.

A plain white hockey mask never looked so frightening as on the head of Jason Voorhees while he terrorizes Camp Crystal Lake. It will make you think twice before getting into a canoe ever again. This one must be watched on its namesake holiday.

14. The Nightmare Before Christmas

Is it a Christmas movie or a Halloween flick? Who cares! This Time Burton musical is wonderful any time of year. It’s kid-friendly, too, so feel free to watch this one with the whole family.

The classic 1984 Ghostbusters film is still our favorite, but feel free to swap in the 2016 reboot if that’s your jam. Replace the popcorn with s’mores in honor of the Stay Puft marshmallow man.

This is the film that made you afraid of clowns. And sewers. Stay home and watch the original miniseries or head to a theater and see the remake.

They’re creepy and they’re kooky, and we can’t get enough of the lightheartedly macabre Addams family. It makes your sibling rivalry look pretty tame. Follow this one up with the sequel, Addams Family Values.

This dark, wacky and witty fantasy is one of our all-time favorites. Watch out for bio-exorcists and (literal) head shrinkers. And just try not to jump up and shake your body line when that last scene comes on.

19. Elvira, Mistress of the Dark

Even if you never saw the TV show, this 1988 Comedy horror has it all: a misadventured cross-country road trip, accidental spells, and show-stopping Las Vegas musical number. What else could you ask for?

Yes, it’s a cheesy ‘90s slasher film. But we love it anyway. There are plenty of jump scares to keep you entertained. Follow it up with Scream 2, which taught us the essential rules every horror film must abide by.

A silly, action-packed tale about an ordinary joe who takes on the zombie apocalypse, Shaun of the Dead has the perfect combination of scares and laughs. Stay in and finish the trilogy with Hot Fuzz and The World’s End if you haven’t had enough of the funny by then.

The theme song for this Frank Oz musical comedy-horror film always gets stuck in our head. This story about a nerdy florist and his human-eating venus flytrap is a little sweet, a little scary, and tons of fun. Feed me, Seymour!

You actually get four Halloween stories for the price of one in this anthology horror flick. The burlap cloaked, footie pajama-wearing Sam appears in all four. Pay close attention to the rules, or you might end up with a severed head.

It’s not really Halloween until we’ve watched at least one Vincent Price film. He is the undisputed king of 1950s horror B-movies. We’re settling in for an overnight haunted house party in House on Haunted Hill, where price plays an eccentric millionaire who offers his guests $10,000 – if they can survive the night.

This action-packed comedy with Woody Harrelson taught us everything we need to know to survive a real-life zombie apocalypse. You’ll want to keep some Twinkies handy for this one. And don’t forget to double-knot your shoes.

This psychological thriller has one of those twist endings that M. Night Shyamalan is famous for. Make sure you aren’t wearing the “bad color” when you watch this one.

In our opinion, this mockumentary-style film about four vampires sharing a flat in Wellington is one of the most underrated comedies of all time. Hilarity ensues as they try to hide their undead appearance while finding live victims to “donate” blood. Every encounter with the rival gang of werewolves (not swear-wolves!) is highly quotable.

Stanley Kubrick’s visually intense psychological thriller will make you question what’s real and what’s all in your head. You’ll be hearing the echoes of “REDRUM” all night after watching this one. Good luck falling asleep.

This musical screwball comedy will have you singing (and maybe dancing) along by the end of the film. Dressing up is encouraged, even if you’re just having a party for one in your living room.

Maybe you think this TV special isn’t long enough to qualify as a “movie” but it’s always on our October must-watch list. Watch it with some colored pencils and craft paper so you can finish your letter to TGP.

No Halloween movie marathon would be complete without this eponymous slasher flick. Join Jamie Lee Curtis as she tries to stay alive while being hunted by her long-lost brother, Michael – one of the most iconic killers in all of cinema. Welcome to Haddonfield.

This 14-minute music video definitely belongs on your Halloween watch list. Inspired by An American Werewolf in London, the video also includes a spoken role by Vincent Price. There are zombies, werewolves, and plenty of dancing.

Which Halloween movies are you watching this season? Did we leave out your favorite? Let us know in the comments!