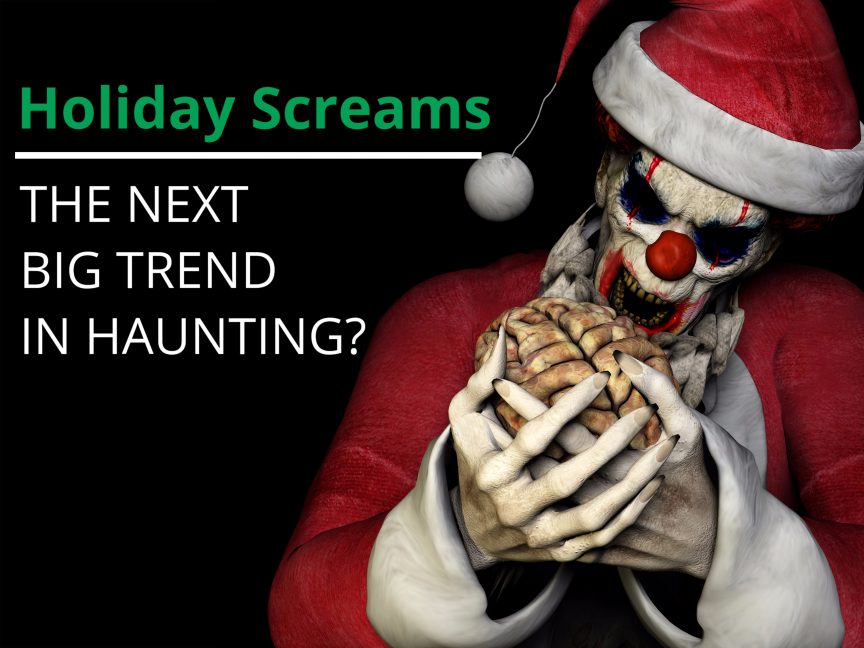 Visions of sugar plums are being replaced by twisted nightmares and frighteningly fun scares this holiday season. A growing number of haunts are launching dark, Christmas-themed experiences to extend the haunting season beyond its typical September-October timeframe.

A few attractions, like the Dark Hour in Plano, TX, were ahead of the curve. Wrapping up their third season of Wreck the Halls, Dark Hour riffs off the Charles Dickens classic A Christmas Carol, adding dark twists including a fearsome ice witch with menacing powers.

Other haunts around the country are catching onto the trend, drawing inspiration from classic holiday folklore and dreaming up new scares that offer an adrenaline-rushing alternative to traditional holiday celebrations.

The fear technicians over at Factory of Fear in Moline, IL have been making the holidays a whole lot creepier with a Frightmare Before Christmas featuring demons like Twitch Claus. In Canton, GA, Paranoia Haunted House terrifies revelers with Holiday of Horrors, where guests come face-to-face with Santa Claws, Krampus and the Grinch.

Over in Tularosa, NM, Horror Hall partnered with a local Lions Club this month to put on “Haunted Holidays” to benefit families in need. The not-so-jolly celebrations continue into the New Year in Hermitage, TN, where Slaughterhouse is helping guests scream in 2017 with their New Year’s Evil party.

Admission for the holiday haunts typically ranges between $13-28, in line with the Halloween season prices. Experiences are similar to a walk-through haunted house, but with a holiday twist to the story.

So what’s causing this surge in Christmas terror?

It’s likely a variety of factors, but one reason seems to be the cult popularity of the Holiday horror film, Krampus. The 2015 film depicts an ancient demonic spirit who takes vengeance on anyone who loses their Christmas spirit. Universal Orlando debuted a Krampus-themed house at their Halloween Horror Nights event this year following the film’s success.

Universal isn’t the only one taking advantage of Krampus’ popularity. Denver’s 13th Floor premiered a Krampus-inspired experience this month, and a handful of other haunts are following suit. Dark Hour, too, featured a Krampus creature and evil elves in this year’s Wreck the Halls.

Although the rights to the Krampus film are owned by Universal, its story is based on a German folktale. According to the legend, Krampus is Saint Nicholas’ half-goat half-demon counterpart, who punished misbehaving children. Designing a folklore-inspired Krampus event allows haunt owners to avoid potential licensing issues with the Universal film.

There have been other dark Christmas folk tales throughout history, particularly in European nations where stories of a shadowy companion accompanying St. Nick are common. Rather than one lone, jolly elf, these legends tell of both a Christmas-gift bringer and a naughty-child punisher. The Pennsylvania Dutch have Belsnickel; in Belgium and the Netherlands they call him Black Pete, and Russians know the same figure as Little Babushka. Those characters faded into obscurity over time but are experiencing a resurgence thanks to these holiday haunts.

There are some key differences from their Halloween counterparts. It’s rare for a holiday haunt to run for a full season. Many of them run for just one or two weekends. Still, as the popularity of these events grows, there’s room for haunts to expand their Christmas frights.

One benefit of holiday haunts is that they help extend the Halloween season, putting businesses on track to evolve into year-round enterprises. At the same time, launching a dark holiday event can be expensive and time-consuming. Most haunts spend the better part of a year building props and preparing for the Halloween season. Transitioning the theme and walkthrough experience for Christmas requires a significant investment of resources.

However, for established haunters who already have the infrastructure, insurance, equipment and access to talent from their Halloween attractions, a well-planned Christmas event can be profitable. And the fans seem to enjoy every bone-chilling, spine-tingling holiday fright.

Have you been to a holiday haunt? Do you think this trend is growing? Or is it just a fad? Let us know in the comments!